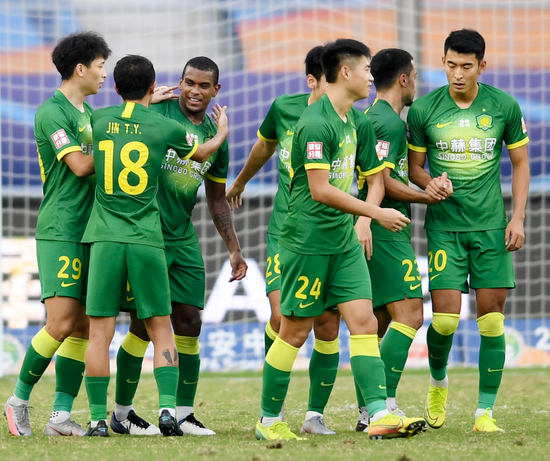 Yesterday, the Beijing Zhonghe Guoan team, which arrived in the Suzhou Division of the Chinese Super League, started the first training session there and officially started the second stage of the league sprint preparation. This Saturday, the Guoan team will compete with Shandong Luneng in the first round of the knockout round.

After the first stage of the league, the Guoan general got a holiday of about a week. The team regrouped in Beijing on the 7th of this month and had a five-day training at the Gaoxin base. During the training camp in Beijing, Guoan maintained a daily practice rhythm. The five internationals Yu Dabao, Chi Zhongguo, Li Lei, Li Ke and Zhang Yuning returned to the team on the 10th and accompanied the team in a teaching match with the Beijing Institute of Technology. Due to the large difference in strength between the two teams, Guoan defeated the opponent 7-1.

According to the arrangement of the coaching staff, the team has already carried out a large amount of physical fitness during the period in Beijing, so this week's training in Suzhou will focus on technical and tactical exercises. The players improved their competitive status through special offensive and defensive drills and group confrontations, and then watched the video clips of the first stage of the Luneng League to learn about the opponent's technical and tactical characteristics.

The core of the team, Augusto, who was injured in the first stage of the league, has not yet participated in the team training. He is training alone with the company of a rehabilitation teacher.

After the first training session, the captain Yu Yang said that the second stage of the league is a knockout. For the two rounds with Luneng, the team must show a better state than the first stage, and show high levels and confidence to face the opponent. . He said frankly that since the Guoan team played in Suzhou in the first stage, they are very familiar with the three venues here. Compared with the Luneng team, this team has a psychological advantage.

He believes that the whole team had been given a week's rest before, and the physical and mental exhaustion was relieved to a certain extent by getting along with the family. At present, the whole team is ready to fight a tough battle. "Facing this kind of cup competition, confidence and determination are the most important. We must show our self-confidence, not fear any opponents, and go all out to win." Yu Yang said.